Food waste recycling in Stroud district is an 'unprecedented' success 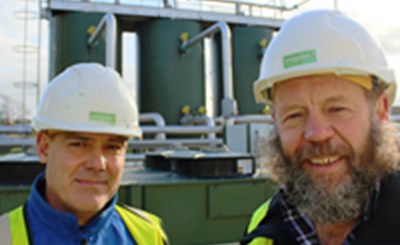 Residents in the district have embraced the new food waste recycling scheme with real enthusiasm, exceeding expectations in the first few weeks of collections.

Over 70 tonnes of food waste was collected in the first week of the new waste and recycling service, followed by 112 tonnes the following week. Just two and half weeks into the scheme 232 tonnes had been collected.

The figures suggest that the majority of the district's residents are recycling all of their food waste, which, once collected, is taken to anaerobic digesters where it is digested and turned into gas and electricity for homes and businesses. The waste product from the process is then used as a fertiliser for farm fields.

"We are aware that the new waste and recycling service is a big change for our residents, however it is brilliant the way the majority of people have got the hang of it so quickly, and are recycling their food waste. More importantly we are diverting food waste away from landfill and reusing it to create green energy."

Jon Stait, plant manager of the Andigestion site near Cheltenham, which houses the anaerobic digesters where the district's food waste is taken and recycled, said:

"We have been very impressed by the amount of food waste being brought in by Stroud district collection vehicles. The quantity of food waste for recycling is unprecedented compared to other areas in the county."

Councillor Pickering added that whilst the take-up of food waste recycling was good news, it is was worrying in terms of how much food is being wasted. He added:

"It is likely that over a period of time we will see the figures drop a small amount, because seeing food being thrown away usually leads to people making lifestyle changes to reduce the amount of food they waste. No matter how hard we try we will have some food waste, such as vegetable peelings and meat bones, however we know that as a nation we throw away 7 million tonnes of food a year, and it is estimated that 50% could have been eaten. Reducing this is not only good for the environment, it saves money too."

A number of residents have asked what they can, or should, line their kitchen caddy and food waste bin with. The council advises that any type of plastic bag or newspaper can used to keep bins clean, although it is not a necessity as the containers can be easily washed -  it's up to individual residents to decide. The anaerobic digesters, where the food waste is taken, have technology which separates the plastic at the start of the process, therefore it does not matter whether compostable or non-compostable bags and liners are used. Most residents so far have favoured lining their kitchen caddy with small plastic bags or liners and then placing these into the outdoor bin, thereby keeping both containers clean.

On week three of the new service the council was still experiencing some issues with missed collections and residents without bins, however the crews from waste service provider Ubico have been working extra days to get issues resolved as quickly as possible.

"We have been working extremely hard to resolve any issues, which were inevitable at the beginning of a major service change for 52,000 households, but thankfully initial hiccups have been limited to a tiny percentage of homes and we expect everything to bed in nicely over the next couple of weeks. In a few cases reports of missed collections have turned out to be due to bins not being put out on time, so we'd like to remind everyone to have their containers out for collection by 6am on their collection day. We also need to emphasise that food waste is collected by a separate vehicle, and so it will not be collected at the same time as rubbish or recycling collections."

For more information about the new waste and recycling service visit stroud.gov.uk/recycling